At this point in time there’s no way of knowing exactly how many brothers and sisters you’ll have. But no matter what kind of family God gives you, being the oldest son comes with a unique responsibility: protecting your siblings. When I’m not around, you are in charge of their safety and wellbeing. To give you a clear picture of what this looks like let me tell you a story from my own childhood.

When I was young, my mom and dad sent me to a summer camp with my older brother Drew. I had mixed feelings about this. On the one hand I was really looking forward to some of the cool activities at the camp—the blob, zipline and rifle range are every boy’s idea of a good time. But on the other hand I was pretty apprehensive about being away from my mom and dad for a week. I probably wouldn’t have even had the guts to go if my older brother wasn’t coming along with me. Our ages were just close enough that we could get placed in the same group of campers in the brand new wooden fort style cabins with him being one of the older campers and me one of the younger.

The first night was rough for me because I really missed your grandma and grandpa. I was pretty moody and kept to myself the whole night. My older brother knew what was eating at me but didn’t want to embarrass me so he kept telling everyone that I just felt a little sick and would be fine the next day. He knew it would just take me a little while to warm up to the camp and then I’d be having the time of my life. He was right, in a short time I was having so much fun I never wanted to leave.

One day all of us campers were mulling around in our two story cabin, waiting for our counselors to come pick us up so we could go play soccer. Drew and I were upstairs when I heard the rest of the guys making a lot of noise below. As I walked down the stairs I saw two kids wailing away at each other so I ran over to break up the fight. I separated the two hotheads, but as I was looking at the guy on my left, the guy on my right cold cocked me right in the nose. I hit the floor like a sack of bricks with blood gushing out like a fire hydrant.

At that point I think everyone in the cabin knew that a storm was about to break loose because I remember things going dead silent. That is until we heard Drew’s heavy footsteps coming down the stairs. He took one look at me before calmly walking over to the kid who was responsible for my crooked nose. I am not exaggerating one bit when I tell you that he picked that kid clean off of his feet by the scruff of his neck and pancaked his face against the crossbeam of the nearest bunk bed. It’s amazing the kid’s head didn’t come clean off. When he was finished flattening the poor guy’s facial features he dropped him in a heap on the floor and walked over to check on me.

We had to spend the rest of the afternoon mopping up blood off of the cabin floor instead of playing soccer, but everyone in that cabin learned a very important lesson: No one touches Drew’s little brother without the wrath of God descending upon him.

Now son, I’m not telling you to go out looking for trouble, but I am telling you not to shy away from it when it comes to protecting the ones you love. This isn’t about getting 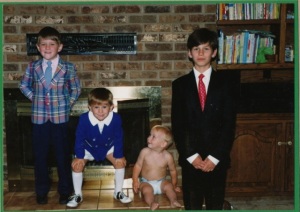 Was Garrett wearing that outfit at camp? If so, I know why he got punched.

revenge or being violent, this is about loving and providing—after all, love always protects. Your future brothers and sisters will be counting on you to look out for them when I can’t and it’s very important to me that you step up to the challenge. Be the kind of man who everyone knows will fight tooth and nail in defense of his family. Be the kind of brother who’s sisters are treated with respect by every other guy in school because they know disrespect will not be tolerated. Be the kind of brother whose brothers are treated fairly because you’ve always dealt fairly with others.

Live your life in defense of the wellbeing of those you love and you will leave a lasting impression with everyone you meet. Don’t believe me? Well what if I told you that about 10 years after this story took place, Drew was a counselor at this same camp and one night heard his instructor telling the story of his own first summer counseling, where some knucklehead had decided to beat up the youngest kid in camp and in return had been absolutely pummeled by the kids’ older brother. You see, after all those years he instantly recognized Drew as the kid who’d spent his whole week at camp looking out for his little brother.

Drew earned the reputation of a protector every day as my older brother. Now go out and start earning yours.